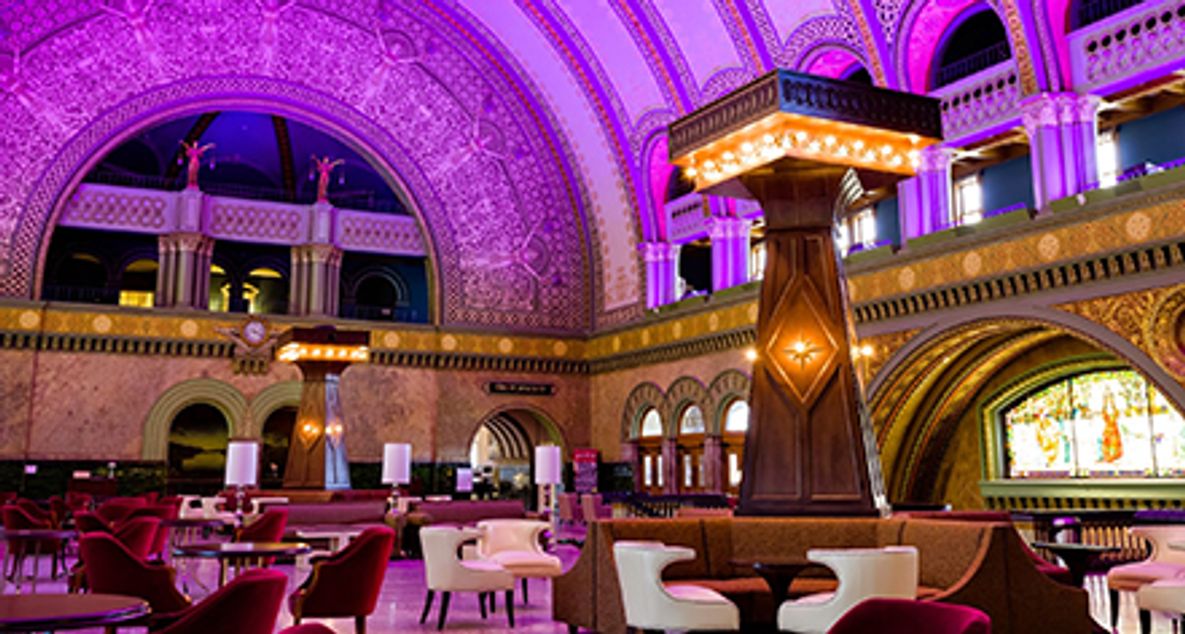 Today, the St. Louis Union Station (also known as SLUS), no longer serves dozens of eastbound and westbound passenger trains. It is the largest station in the country and was built during an era of rapid westward growth. It has been beautifully restored and can be used for entertainment or shopping. There are many museums, plays, restaurants, and cafes. You can take tours or stay in the hotel.

It was built in the middle 1890s. It was still in use until 1978 when Amtrak’s final long-distance passenger train left the train shed. MetroLink, the city’s light rail transit service, continues to serve the station beneath the subway tunnel train shed.

The shed was converted into an outdoor entertainment area with an aquarium, shopping mall, and outdoor dining area. It was a remarkable transformation. View of St. Louis Union Station in November 1977, right before Amtrak left.

St. Louis was the “Gateway To The West” for the past ten years (1920-1921), because it was located at the confluence of the Mississippi River and Missouri Rivers. Just over 20 years ago, the Transcontinental Railroad was constructed. New lines are still being added to the Frontier. The city is the terminus of many trunk lines from eastern and western countries, as well as future subsidiaries.

After the Civil War, St. Louis was America’s fourth-largest metropolitan area. It is now the fourth-largest, after New York City and Philadelphia. Union Station is home to Missouri Pacific’s #11, the “Colorado Eagle”, train. Gulf, Mobile & Ohio E7A #222102 also has train #4, the “The Limited,” which will leave Union Station on April 17, 1963. Many westbound settlers were able to pass through the city thanks to its gateway status. This was an important factor in the city’s growth. St. Louis was aware of its importance and wanted a station to connect multiple terminals across the city. It hosted a global design contest and invited submissions from architects across Europe and the United States. Link & Cameron was chosen as the winner.

Brian Solomon’s Railroad Stations states that Thomas C. Link (also known for the French Romanesque style) and Edward B. Cameron suggested a design to reflect Paris’s French heritage. Hans and April Halberstadt stated in their book, The American Train Depot & Roundhouse that the building evoked a great chateau on the Loire River. It is made of Missouri granite and has an unusual appearance. It stands out among Midwestern cities like Cincinnati, Kansas City, and Indianapolis which were built between 1878-1890. On April 16, 1963, the #4 train of Gulf, Mobile & Ohio, known as the northbound “Limited”, leaves St. Louis Union Station, bound for Chicago.

The most notable exterior feature was its 280-foot clock tower, which boasted towering Romanesque arches. Grand Hall had a 65-foot vaulted ceiling and stained-glass windows that were made in St. Louis by Davis & Chambers. The interior was divided into three sections. The Headhouse contained the Grand Hall. It featured mosaics/frescoes from Healy & Millet of St. Louis as well as gold leaf details, scagliola flooring, and mosaics/frescoes. The main concourse measured 610 feet by 70ft and was 610 feet in length. It was 70ft wide and 610ft long. The 600-foot-wide Trainshed was designed by George H. Pegram. It had 32 tracks and covered almost 12 acres. The original tenants, MP, StLIM&S and Wabash, O&M, and L&N created the Terminal Railroad Association of St. Louis in 1889. The design and construction plans were combined. The Aloe Plaza, named after Mrs. Louis P. Aloe and built for $100,000 in 1940, was named for her. Bronze statues depict where the Mississippi River meets the Missouri River. Carl Milles, an artist from Sweden, designed these bronze statues. The station was able to serve 31 railroad lines at its peak and 22 railroads, some of which joined the association later. Many of the most impressive trains to ever be in service on TRRA’s rails include:

Abraham Lincoln in the Gulf and Mobile

All Wabash named trains, including Bluebird and Wabash Cannon Ball

The St. Louis Union Station was opened to the public on September 1, 1894. It cost $6.5million and was welcomed with great fanfare. It was the first mall in the country, and it featured shops that lined the arcade next to Grand Hall. It’s light and airy with an open feel. It was retired after only 10 years of service. It was renovated to meet the needs of the many visitors who visited the city for the 1904 World’s Fair. It was renovated last in the 1940s. The interior was the main focus. As more people moved to highways or other airlines, it slowly fell in the 1950s/60s.

Amtrak assumed control of most intercity railway services in the country on May 1, 1971. Union Station lost three trains from its trainshed. The last train that left Union Station on October 31, 1978, was the Inter-American (Chicago-Laredo, Texas). Oppenheimer Properties bought the building for $5.5million. This was quite a significant difference from its predecessors. The new owners immediately renovated the structure. Although there was no train service long distance, the owners envisaged it as a popular entertainment venue. After a $150 million restoration, it was reopened to the public in August 1985. Saint Louis Union Station now looks better than it did when it was railroad owned. It is a landmark in the city thanks to its lavish interior and recently renovated rooms. There are more than 20 restaurants and specialty shops within the station. The station underwent major renovations in 2011. 2011 saw a major renovation and upgrade of the station. Tourists and visitors have been given more luxurious accommodations. Metro Link continues to provide service even though the four tracks that used to be there were removed.